Zuma Deluxe is an award-winning tile-matching puzzle video game, originally released in a web form in 2003, but popularized greatly when released as a packaged product for PC and Mac in 2004, and later console forms. Since its release, the addictive and fun gameplay mechanic of this game made it one of the most popular arcade experiences of the 1st decade of the 21st century. 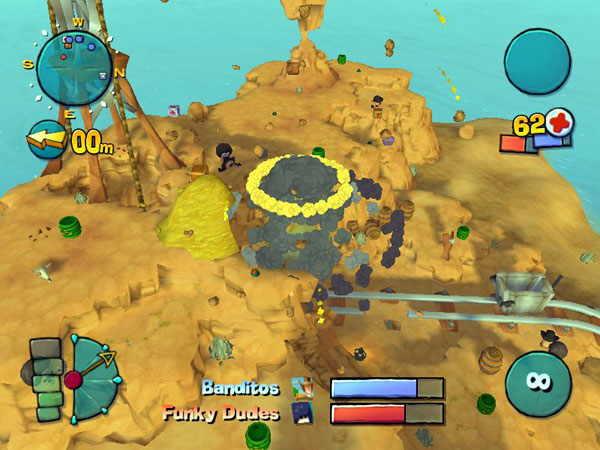 Its gameplay is centered on eliminating the row of balls that are slowly rolling across the screen in a predetermined path, with the player being tasked to throw the balls and eliminated the oncoming ball group by matching the colors. To eliminate the balls, the player must match three or more balls of the same color. In some cases, the elimination of one group of colors will cause a satisfying chain reaction that can eliminate many groups of balls. However, if the group of balls reaches the skull at the end of their path, the game is lost.
To make the gameplay more varied and interesting, developers have added four types of powerups that can be activated by blowing up the ball with a powerup symbol. The powerups include pushing the ball group backward away from the skull, time slowdown, accuracy boost that paints the travel path of each thrown ball, and finally explosion power that will eliminate a large number of balls in a small radius.

The design of the Zuma Deluxe is simple but highly addictive. Its easy rules, fast-paced gameplay, satisfying audio/visual design and instant load times promote repeated play and chasing the high-score.
After its release, Zuma Deluxe was nominated for numerous puzzle/arcade end of the year awards, and it served as a base for several sequels that were released in the following years.
Modes of Play
Zuma Deluxe can be played in two basic modes:
Adventure mode

is the standard way of playing. It gives players three lives, with the ability to earn a new life at every 50 thousand points earned. The campaign is separated into three temples, each with numerous worlds, and each world has a selection of individual levels.
Gauntlet mode is practice mode with increasing levels of difficulty. The players can play every stage that they have unlocked through the Adventure mode, with the ability to raise the difficulty level to more challenging Eagle, Jaguar and Sun God modes.
Main Features

The strategy that should be employed when first playing Zuma deluxe is the slow and steady approach. The keys to being successful at the game are accuracy and efficiency. The game starts out slow and forgiving, so take time to fire intelligently.

Watch what happens each time a group of balls is destroyed. Knowing the basic principles and physics of the game are just as important as accuracy. download free. full version game and install on your Windows PC of all version from Windows XP to Windows 7, 8, 8.1 and 10.

Game Selection: You can choose either Adventure or Gauntlet mode: 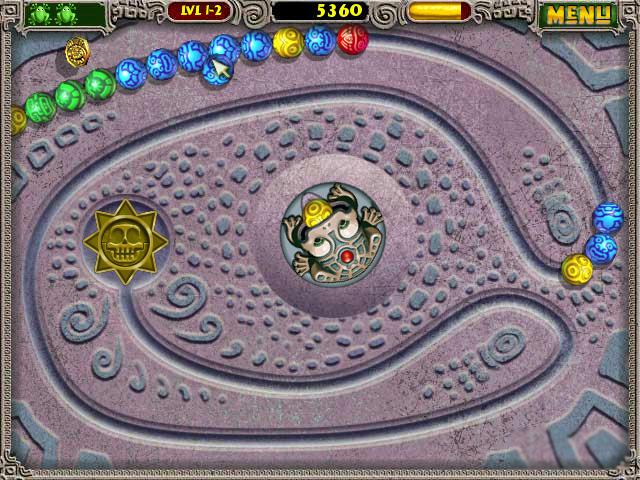 1. Adventure mode is best for new players. You will explore a series of temples in search of the treasure of the Zuma. Each temple is divided into three stages and each stage has several levels. When a level is described with two numbers, such as Level 2-1, that means it is the first level of the second stage. When you start a level for the first time, it will be unlocked to play in Gauntlet mode later.

2. Gauntlet mode is better for experienced players. As you complete levels in Adventure mode, they are unlocked in the Gauntlet mode. You can then play an endless game on any of them, or on a random succession of levels, trying to earn higher ranks and the fabled Sun Gem.

• Zuma Meter: On the top bar you will see a small orange meter that fills as you destroy balls. When you completely fill this meter, you will hear a voice cry, “Zuma!” and all the balls will roll backwards for a moment. No new balls will enter the screen after this, so you just have to clean up the remaining balls to finish the level.

• Coins: From time to time you will see a golden Zuma coin appear. Shoot these with a ball to score big bonus points! If you can hit more than 1 coin on a single level, you’ll get even more!

• Combos: You can make tons of extra points by scoring combos. A combo occurs when you cause two or more explosions by firing a single ball. That is, one explosion causes the balls on either side to slide together and detonate, perhaps chain-reacting into a third explosion, and so on. These take some time and care to set up, but they’re worth it!

• Chains: You can get a chain bonus by completing 5 or more sets in a row. That is, each ball you fire must cause a detonation. If you can cause 6 or more in a row, you’ll score big points!

• Gaps: If you can fire a ball through a gap in the balls so that it goes through and creates a set on the other side, you’ll receive a gap bonus! If you can do it through two gaps, you’ll get the rare double gap bonus! On some levels, a triple gap bonus might even be possible!

• Ace Time: If you can finish a level really quickly, you may qualify for an Ace Time bonus! On the level up screen you’ll see your time and the Ace Time. You’ll get bonus points for every second by which you beat Ace Time. Press the ’t’ key to see how much time remains to get the Ace Time bonus.

• Random: When you have the Random map selected, you will progress through a series of levels chosen randomly from maps you have unlocked. Difficulty will increase with each new map. The Random mode can be accessed by cycling thru all the maps with the two arrow buttons.

• Specific: Use the Back and Next buttons at the bottom of the screen to select a specific temple to play. You must have unlocked the level from within Adventure mode to be able to play it. You will then play an endless game on that single map. This is also good for practicing. The longer you survive, the higher your rank will rise, until you earn a Sun Gem for the map.

• Practice: If you enable Practice mode, you will play the selected level over and over, just as in Adventure mode. This way, you can try to improve your performance on specific levels.

• Survival: In Survival mode, you will have a non-stop stream of balls rolling onscreen, faster and faster, until you ultimately perish. How far can you make it before being overwhelmed?

How to Play Free Zuma Deluxe on Window PC:

• Point your mouse cursor somewhere on the screen and left click, and the stone frog will fire the ball in its mouth towards the cursor.

• Right click your mouse to switch the ball in the frog’s mouth with the ball color shown in the gem on the back of the frog.

• To quit the game or change your options, click the Menu button in the top right.

Powerup Balls: You will be aided in your task by Powerup Balls that appear occasionally. These will turn back into normal balls after a while if you don’t use them, so learn to recognize the different types! All Powerup Balls can be triggered by detonating them as part of a set.